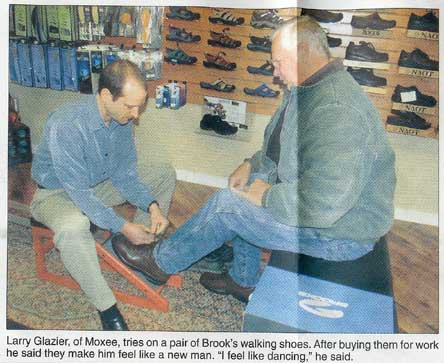 YAKIMA-Brad Vaux is a foot savvy guy. As a marathon runner and triathlete and a member of HardCore Runners in Yakima, he knows the importance of good footwear.

So much so that 20 years ago he went into the business of helping people with foot problems. Vaux, a Certified Pedorthist, C.Ped, worked for Yakima Orthotics for 15 years.

But three years ago, he and wife, Joan, a dental hygienist, decided to open a shoe store. The couple remortgaged their house to get a start carrying key shoes, like Dansko, which allowed them to grow.

"We did quite well, but we were told we wouldn't make it," he said.

But knowing feet turned the store into a destination for foot-weary shoe shoppers. The two received referrals from doctors and podiatrists and specialized in foot-friendly shoes with rounded, boxy toes.

They did well enough that when the opportunity came to move to the Westpark shopping complex at 40th and Summitview Avenues, they jumped at the chance. 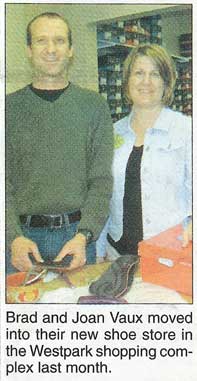 A month ago, the couple opened the new store in the mall, which is undergoing a transformation. And Vaux couldn't be happier.

"We were very lucky this location came up," he said. "Now I feel we're in the best location.

"The changes here at Westpark are very positive," he said. We have an excellent anchor in Walgreens.

Vaux credited the owners, Jean and Jay Sentz, for their vision to make Westpark a better shopping location for the West end.

The concept for Vaux Shoes is foot healthy, nothing fancy, but definitely more comfortable.

“People come in and say these shoes are killing me, and throw away their old shoes when they walk out the door,” Vaux aid.

Before Vaux began carrying more lines in the new store, women would come in and ask, “Do you have women’s shoes?” Vaux said.

“They may look a little unisex, but it’s the way they have to be if you want comfort,” he tells them.

Although foot healthy shoes are not as dressy as traditional footwear, Vaux said he carries shoes that lean toward higher fashion.

“Most important, we are fairly confident that their foot will feel better when they leave here.

Vaux started with Dansko as the marquee brand in the old store. Joan had been wearing the Dansko clog at work and, when Nordstroms moved on, there wasn’t any place to buy the shoe.

Timing was right for the Vauxes to open the store and begin carrying the popular clog, known for its solid, anatomically supportive foot beds and boxier toe. 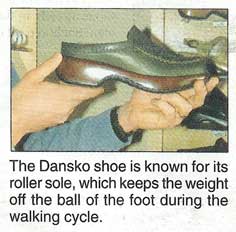 The clog, popular with nurses and others who spend a lot of time on their feet, has received the stamp of approval from the American Podiatry Medical Association and are known to help with common foot problems.

"I can almost guarantee that people will feel less tired and have less back pain wearing these shoes," Vaux said.

The clog, as well as the Dansko shoe and sandal, were first made in Denmark. Factories in Europe, Morocco, Poland, and Portugal now produce Dansko footwear.

Vaux said an initial investment of $115 for a Dansko shoe is well worth the money because they wear well. The rocker style sole shortens the amount of time spent on the ball of the foot during the walking cycle, which is effective in reducing discomfort, he said.

Dansko remains the most popular shoe, but since opening the new store, Vaux carries at least ten other foot-friendly brand names. Most are made in Europe.

The Naot shoe is made in shoe and sandal are known for a patented cushioned cork removable insole that provides a supportive foot bed.

Kumf shoes are made in New Zealand. The Orthotic shoes are made with a steel shank and are ideal for people who tend to roll their ankles when they walk, Vaux said.

“Each line of shoe we carry serves different customers needs,” he said.

That includes the need for dressier shoes that is still comfortable and supports the foot, which Kumf attempts to do.

Another popular seller is the Keen sandal, designed originally by a sailor who was always bumping his toes on deck and wanted a shoe that would protect his toes, and grip the deck.

Vaux said people buy the sandal for everything from walking the dog to walking in water.

“The all-terrain shoe has a sole that is solid and grippy,” Vaux said.

The Keen isn’t stylish, but the Josef Seibel sandal fills the bill for the shopper looking for a little more style in a sandal.

Vaux said that if the shoe isn’t comfortable right out of the box, he will encourage the customer not to buy it.

“It should feel and fit right from the get-go,” he said.

The shoes range in price from $90 to $150, but, Vaux said, are a great value because they wear well.

Because of his running experience Vaux was also inspired to carry Brooks, Asics, and Mizumo high performance running shoes. All can be used for walking as well. [see our footwear lines]

He sells other high-end retail products, such as Smartwool socks, made of Marino wool, a durable running sock.

Joan, who is co-owner, still works as a dental hygienist Tuesday through Thursday. She helps at the store Friday and Saturday.

The store is closed Sunday and Monday.

Vaux said that because he receives referrals for his expertise he wants to be at the store whenever it is open.

“We pride ourselves in service and knowledge,” he said.

This article was published by the Yakima Valley Business Journal in April 2006 and used here with permission.